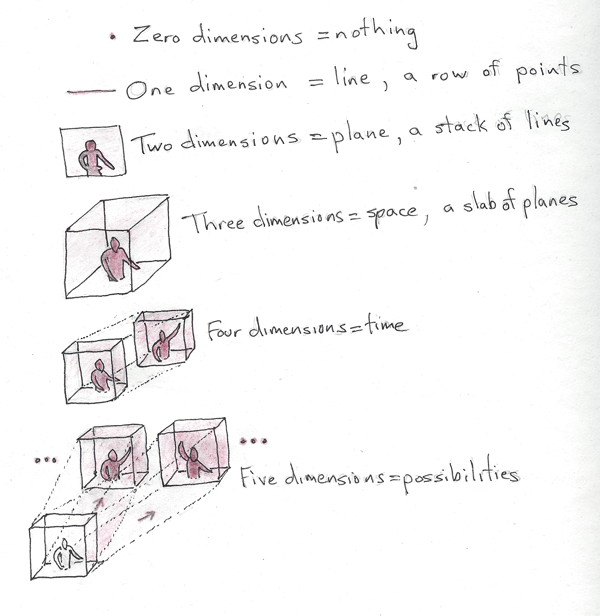 Generally a dimension is a floating parameter which describes a characteristic of an entity, and which can vary independent of the entity's other characteristics (other dimensions). An entity requires an additional dimension when a lower number can no longer accurately describe it.

More specifically, dimensions describe the specific location of an entity in the universe. In a 5-dimensional universe, these are the three space dimensions as well as time and the wave function (=possibility).

Zero dimensions describes a point with no properties. It is in fact nothing.

One dimension decribes the most basic entity, one which has a single quantifiable property, for example length. The variation of this property can be represented on a straight line.

Two dimensions describes an entity with two properties, for example length and width. The variations of these properties can be represented on a plane.

Three dimensions ... in a similar fashion to the above, the variations of three properties - for example length, width and breadth - can be represented in familiar space.

Four dimensions can be represented in space and time.

There may be an infinite number of potential dimensions. See also dimesplitism.

The number of dimensions required to describe the position of an entity depends not only on the entity, but also on the relative movement of the observer.

Imagine you put your finger on a fogged up mirror. You will create a dot. This creates a 0-dimensional point (imagine the dot has no area). If a single force causes the mirror or your finger move in relation to the other, you will draw a straight line, which is 1-dimensional.

Look around you right now. Anything that appears still is one dimensional. It is moving in time and space in the same direction and speed as you. It has one property: distance from you, the observer. If the object is moving it must have a different direction or speed in space or time. In fact whenever an object moves in relation to an observer, its time also varies.